The quest for natural whitening agents: the confectionery world after TiO2

Food and confectionery manufacturers throughout the EU are currently having to come to terms with the EU’s 2022 ban on titanium dioxide in food applications. For decades now, titanium dioxide, otherwise known as TiO2, has been a major player in the global world of food and confectionery. The popular additive is typically used as a food colorant, called “titanium white,” or simply E171.

First mass-produced in 1916, TiO2 has grown into the most widely used white food pigment thanks to its brilliance and ease of processing. It is typically found in ice creams, dressings, cakes, marshmallows, chewing gum and many other types of candy.

When it comes to multi-colored dragées, TiO2 is used to pan-coat the hard white layer between an often dark-colored core and its coating—a necessary step to achieve the desired colorful brilliance. In sugar-coated chocolate dragées for example, the white layer opacifies the dark chocolate color to enable a shiny, true and vibrant coating. It also creates the characteristic crunchiness and sensory experience of the dragée.

No longer considered safe in the EU

Following a request by the European Commission in March 2020, the European Food Safety Authority (EFSA) updated its safety assessment of TiO2 from 2016, when the need for more research to fill data gaps had been highlighted.

Taking into consideration the latest scientific research and data, the EFSA Panel concluded in 2021 that TiO2 could no longer be considered safe as a food additive, even though the evidence was inconclusive. The decision was based on genotoxicity concerns that could not be excluded. In other words, TiO2 particles accumulating in the body after oral consumption could have the ability to damage DNA and cause cancer.

As of January 2022, following the EFSA’s decision, the European Commission has banned TiO2 as a food additive. Food and confectionery manufacturers were granted a six-month phasing-out period from February 7 until August 7, 2022, during which they needed to reformulate their products if they want to keep them on the market.

The ban did not come as a huge surprise to the industry as TiO2 had been under global review for quite some time, sparking a demand for alternatives and a push for companies to develop reformulations. 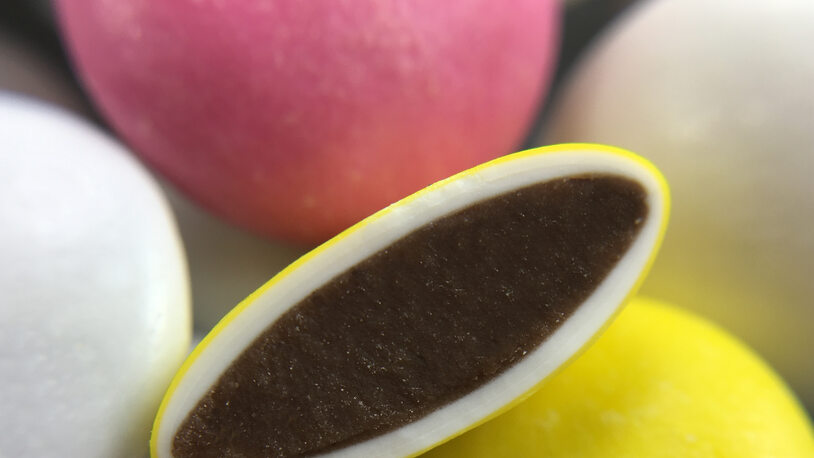 Whitening agents play a substantial part in the hard sugar panning process, which creates an opaque layer between the center and the often brightly colored surface.

The EU ban of course is making waves in the industry all around the globe. Other regions worldwide are preparing for a future in confectionery potentially without TiO2. A recent ruling in Canada stating that TiO2 is considered safe shows that discussions around the assessment of TiO2 as a food additive will not be over anytime soon.

At the same time the legal phasing out in the EU goes hand in hand with the general worldwide trend toward more natural products and the industry’s turn toward natural ingredients—as these tend to be perceived as healthier, better for the planet, and are increasingly sought after by consumers.

The challenge for alternative whitening agents in confectionery: While only very small quantities of TiO2 are required to create the brilliant opacity and whitening effect desired in confectionery, much larger quantities of alternative whitening materials are often needed to fulfill the same purpose. Current alternatives commonly seen in the confectionery market are calcium carbonate and calcium phosphate, rice starch and modified food starch. Food starch has to be chemically modified due to its poor solubility in cold water and high viscosity when gelatinized. Other approaches build on using substances that do not contain pigments as such but enable a specific surface structure that creates the appearance of whiteness through reflected light.

However, current TiO2 alternatives typically do not display the same surface, viscosity or opacifying properties as TiO2. In hard sugar panning, due to the need for high dosage rates, TiO2 substitutes can have an unfavorable impact on the texture of the coating solution. For example, the sugar solution can thicken, which affects the viscosity and thus the coating process and consequently the final product, e.g., the sugar dragée. And of course, when larger quantities are required, this immediately increases the production costs of the product. Other options may require the manufacturers to make major changes to their established processes, potentially at the expense of efficiency.

Another concern is that replacement products are struggling to match the easy applicability and mass-processability of TiO2. Finally, confectionery manufacturers also have to take into account that regulatory approval of the solutions will vary between countries and regions.

Facing up to the challenge of finding a reasonable alternative to TiO2, CAPOL has developed an alternative opacifying solution that is cost-effective and achieves superior results, especially in hard sugar panning.